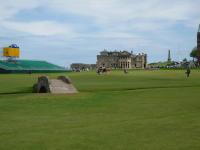 The St Andrews Fairtrade Town Campaign group has been working closely with the R&A since the last time the Championship was staged in St Andrews in 2010. This has led to the R&A introducing Fairtrade products as part of The Open’s broader commitment to sustainability.

All tea, coffee, hot chocolate, sugar and bananas supplied throughout the Championship were Fairtrade, and with around 200,000 spectators this translates into a tonne of coffee, 10,500 teabags, 64,000 sugar sticks and 80kg of hot chocolate and 12,500 bananas!!

To publicise this commitment to ethical sourcing, information boards were sited around the event site explaining the use of Fairtrade produce.  This means that not only does The Open have a really positive impact on local businesses, but it also has a global reach improving the livelihoods of some of the poorest people in the world.   In a Press Release agreed by the the town Fair Trade Group, The Open organising committee and the Scottish Fair Trade Forum, Michael Wells, The R&A's Director of Championship Staging commented on how delighted he was to be working closely with the Fairtrade Group to ensure food and drink offering meets the highest standards for ethical production.  Mary Popple, chair of the St Andrews Fairtrade Town Group confirmed that all tea, coffee, sugar, hot chocolate and bananas supplied throughout the championships was FairTrade.

Martin Rhodes Director of the Scottish Fair Trade Forum commented, 'How good it is to see Scotland's status as a Fair Trade Nation further enhanced by the growing commitment to Fair Trade by high profile events such as The Open and this is an excellent example of the impact that local Fairtrade Towns groups can have.'  Adam Gardner, Communities Campaigns Manager at the Fairtrade Foundation added,'The Open has made a fantastic commitment to the te, coffee, banana and cocoa farmers and workers around the globe working hard to bring us the products we love, but all too often not receiving a fair price for their work.  Thank you and congratulations to the St Andrews Fairtrade Town Group for their hard work and dedication.  We're delighted to have The Open on board and we hope the decision to serve Fairtrade at this major sporting event will inspire other organisations and events to follow suit.'

As well as working with The R&A, with the help of students from the University, the Fairtrade Town group has also recently updated the local Fairtrade Directory, 'The Finder', which is a list of retail and catering outlets in St Andrews that sell or serve Fairtrade products.  These guides are readily available around town in shops and cafés, in accommodation and at the town library and visitor attractions in town.

Fair Trade at The 144th Open

Students setting off to update the town FT Directory