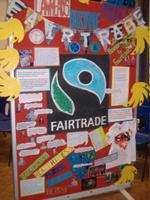 5 March 2011, the Saturday in the middle of Fairtrade Fortnight, Morrisons  agreed to allow us to have a stall at the entrance to their supermarket where we gave out information on Fairtrade and particularly this year's Fairtrade Fortnight  Show off your Label campaign together with copies of our St Andrews Fairtrade Finder - the must have Directory of where to find Fairtrade products and services in and around St Andrews.  Lots of groups around town are doing their bit ot join the Show off you Label campaign:

Madras College Cluster Schools - An exhibition of work all the P5 pupils have been doing on global citizenship, including fairtrade at Madras College, Kilrymont Campus on 23rd February from 7-8pm.
Canongate Primary School - Fairtrade products in the Tuckshop and taking part in the Fairtrade Foundation Guiness record breaking attempt for the longest and fairest piece of bunting ever.

28th February - launch. Fairtrade hot chocolate and live music on the castle sands beach and create a fairtrade logo on the beach using green and blue garments bought in charity shops. This event will be around midday.

2nd March - Fairtrade Cafe with T-shirt painting and bunt-a-thon workshop, with lots of fairtrade homebaked goodies and hot drinks. This will be from 2-4pm in the undercroft of the medieval history department.

10th March - film screening, including short documentary White Gold.  This film showing will be 7:30pm in School I, United College.  Open Mic night with Music is Love during the last weekend.
Holy Trinity Church - Sunday 27 February in Holy Trinity a 'Moment for Mission' will explain why Christians should be Fairtrade activists. Wednesdays 2 and 9 March Coffee Mornings will be held featuring FT goods. Sunday 13 March another 'Moment for Mission' commending the principle of placing a regular order of FT staples.